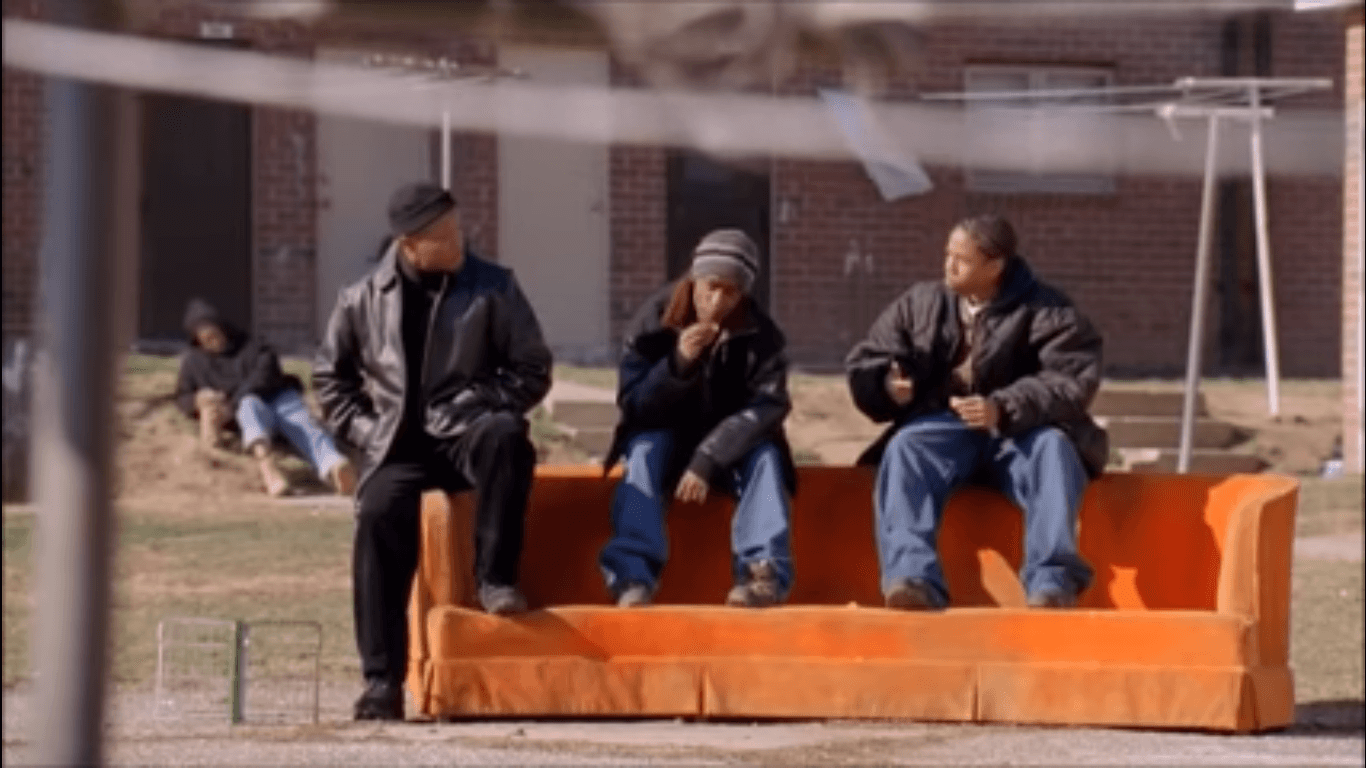 Click for more Randall Writing on Film and TV… Or read about the hidden vegan agendas of Game of Thrones, The Sopranos and Breaking Bad

Click here for legitimately serious writing on The Wire, with no mentions of veganism.

The Wire is, without question, a remarkable piece of television, with a strong socio-political message. But people often don’t take the time to think about what exactly that message is. The drug trade, the stifling institutions – what do they represent? The DVD case for Season One tells us to listen closely – and if we do, it becomes clear that The Wire is a subtle, and sometimes not-so-subtle, metaphor about giving up animal products.

One of the very early scenes in The Wire sets out this theme clearly. It’s the famous McNuggets exchange, in Season One, Episode Two. D’Angelo, who, deep down, is already looking for a way out of “The Game,” rejects the offer to eat the McNuggets, as the more short-sighted Poot and Wallace tuck into the chicken with gusto. Wallace revels in the cunning food-production technique that has turned this animal corpse into something effortlessly edible, causing D’Angelo to lose his cool. His response makes it clear that he perceives the whole notion of McNuggets to be a trap – for the heedless consumers like Poot and Wallace, and for the unfortunate workers who slave away in the McNuggets basement, serving the corporations who have a vested interest in people eating meat. “Fuck ‘right’! It ain’t about right, it’s about money!” says D’Angelo heatedly. In this scene, Wallace reveals for the first time his childish naïveté which will cost him his life.

By Season One, Episode Twelve, D’Angelo is desperate for Wallace to open his eyes and see the truth: he tells him that his old way of life won’t work anymore, and he needs to change. In urging Wallace to quit, D’Angelo comes close to the realisation that he, too, must turn his life around. But at that moment, his mother drives past and hands him some crabcakes for lunch. Faced with the smell of the crabcakes, D’Angelo suddenly forgets about his and Wallace’s need to escape from their complacent, meat-eating way of life. This foreshadows the moment in the subsequent episode when D’Angelo, on the verge of becoming a police informer, is talked out of it by his mother. At every turn, it is D’Angelo’s mother who stops him from escaping to a better life, and she only realises the damage that she’s done in Season Three, Episode Eight, when McNulty confronts her with the consequences of her actions. Furthermore, the moment with the crabcakes foreshadows that however hard the two boys try, they will never escape from a lifestyle that depends on murder, whether of animals or humans; and this lifestyle will eventually cost them both their lives.

Did you ever notice how the police interrogation rooms, where The Wire’s gangsters come face to face with their crimes, are also consistently associated with the consumption of animal-based foodstuffs? In Season One, Episode Thirteen, Wee-Bey makes explicit the link between the meat he is eating and the murders he has committed, cheerfully listing his crimes as he tucks into his food. When asked if he wants to confess to any more murders, he says, “Fuck it, then. For another pit sandwich and a ‘tato salad, I’ll go a few more.” A pit sandwich is a Baltimore specialty – and the key ingredient is beef.

Not long afterwards, the interrogation room is the scene of another spectacle of animal-devouring, in Season Two, Episode Two. Bunk and McNulty are secretly eating crabs in there, enjoying their ill-gotten gains. This scene is evidently part of the pattern of these two recklessly enjoying – and destroying – themselves together, to go with their frequent boozing and womanising. At first this scene makes little sense, as it does not seem to fit the pattern – until we observe the gusto with which they devour the crabs. Their immoral appetites are once more getting the better of them: as ever, they simply can’t help themselves.

McNulty’s soft spot for non-vegan food gets him in trouble at other moments of the show. In Season Three, Episode Nine, McNulty and Prez are buying Chinese food when they get into an incident which leads to Prez accidentally shooting dead a fellow cop. The link between the food and the cycle of death is made explicit, unfortunately moments after the end of this YouTube clip: Daniels sees a red stain on McNulty’s shirt and mistakes if for blood, until McNulty tells him it’s from the takeaway. McNulty might not be the one who killed a fellow-officer, but he is associated with Prez’s two crimes: buying non-vegan food, and shooting a man dead.

This is not the only time on The Wire that a food-run is associated with death. Only two episodes earlier, in Season Three Episode Seven, Poot’s muscle is gunned down moments after Poot returns from a trip to the corner shop.

Meanwhile, in Season One, Episode Nine, when Wee-Bey goes to pick up some cheese fries for Avon and a burger for Orlando, things descend into a violent shootout in which Omar is wounded and Avon is very nearly killed. Food and death, food and death: the message in The Wire couldn’t be clearer.

The addicts’ slavery to the drug trade, the institutions’ safeguarding of the status quo at the cost of the freedom and humanity of every individual: it’s now clear that this is all a metaphor for our society’s self-destructive dependence on animal products. In Season Three, Carcetti and Burrell form an uneasy alliance with a view to achieving some actual political reform – but we know their heart isn’t really in it, because this alliance is forged over non-vegan lunches. And sure enough, both of them give up, more concerned with their own careers than doing anything about Baltimore’s meat problem.

This is most grimly illustrated in Season Two, which explores the horrible realities of what it’s like for girls to be shipped into US ports with no lighting and little air. They are valued only for their bodies and not as beings with rights, and the people who transport them do not care about their lives except as a source of money. The fact that this is a metaphor for how animals are treated across the world is made clear in Episode Nine, when the Greek shows that he is unbothered by the loss of a brothel of imported girls – during a scene in which he is eating a non-vegan meal with his lieutenants. While men like this have power over human and animal life, the show is saying, no lasting change to our habits can be achieved. At the end of Season Two, the Greek is proved right: more girls arrive in another shipping container.

But The Wire does not give up hope for a change. In the final episode (Season Five Episode Ten), Bubbles – the quintessential addict – finally finds the inner strength to turn his life around for good, and he is rewarded with the thing that he has dreamed of for a long time: he is allowed to sit down with his family for a healthy, presumably vegan meal.

Meanwhile, the drug lords strike a deal that will put the violence of their business behind them, working collectively towards a more responsible future. And the name of the last drug dealer to die? Perhaps the most despicable of all the villains to appear on the show, who has to be killed because he’s the last obstacle to a better life? Cheese. In Season Five Episode Three, when an encounter with Cheese proves to be fatal for Hungry Man, the symbolism of the names is almost too obvious. So it is once more at the end: the permanent rejection of Cheese comes from Slim Charles, “The Tall Man,” the only character on the show with two flattering physical nicknames. Without Cheese, we are finally ready to be Slim, and look forward to a reformed world where violence and exploitation have been replaced by veganism.