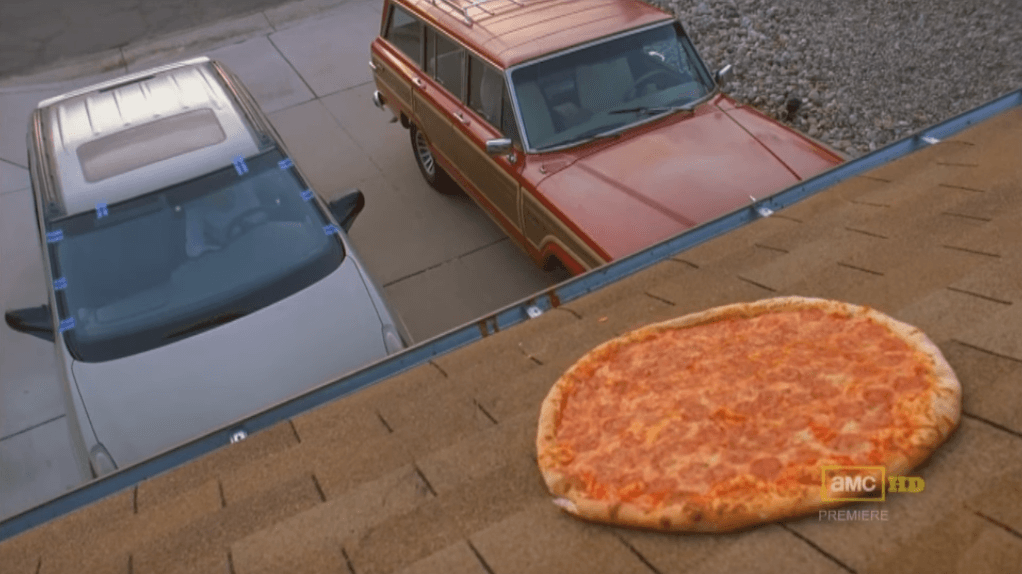 Click for more Randall Writing on Film and TV… Or read about the hidden vegan agendas of Game of Thrones, The Sopranos and The Wire

Breaking Bad is a phenomenal show, no question. Its engrossing storytelling has broken old boundaries, while it has been unafraid to focus on some pretty serious themes. But what about the most serious theme of all? It’s well-known that there are many layers of meaning to Breaking Bad, but not enough people have noticed its inescapable message about the dangers of animal products.

Let’s start at the very beginning. After a frenetic opening scene in the desert, the opening credits roll for Episode One, and we get to know Walt for the first time. The next ten minutes emphatically illustrate that Walt is dissatisfied with his life – personally, professionally, sexually – but too mild-mannered to do anything about it. As the name of the show suggests, Walt will then spend the rest of Breaking Bad refusing to compromise anymore, learning to take what he wants, at any cost.

In context, the veggie bacon represents Skyler’s attempts to look after the family, while Walt’s quiet disappointment is the first clue that he sees himself as deserving more, as being special, in a way that even he does not yet recognise. It becomes Walt’s defining characteristic that he does not care how much pain he causes to others, whether his victims are humans or animals – as long as gets personal satisfaction. He likes the taste of bacon, and – by his own twisted moral compass – that’s good enough for him.

Season Five opens with a scene that mirrors this one, on the last day of Walt’s life. Walt is in a diner, alone, and he’s been given real bacon. It’s a scene that foreshadows the whole theme of Season Five: Walt gets what he wanted, but at the cost of his family and humanity. The bacon implies yet another victim of his insatiable greed.

It’s impossible to forget that Walt’s greatest meth lab is part of a respectable fried chicken operation, Los Pollos Hermanos. The two businesses are inextricably linked, as this cold open to Season Three, Episode Nine makes clear: the chicken “advert” shifts seamlessly to a montage of the immoral drugs organisation, and the chicken transforms before our eyes into meth.

The message could not be any more obvious. People enjoy eating the chicken and snorting the meth, and look the other way rather than think about the suffering that these activities are built on. The corruption at the heart of Los Pollos Hermanos is unavoidable, the evil of the meth being hidden actually inside the chicken product. The happy façade of Los Pollos Hermanos is a marketing trick that dupes its customers, while its chief executive coldly controls the lives and deaths of people and chickens alike.

The brand has attained cult status among fans. Why do people wear Los Pollos Hermanos t-shirts or proudly display mugs with its logo? In effect, they are saying to the world, “To the uninitiated, this branded item may seem like a harmless side-effect of consumerism, but Breaking Bad has taken me beneath the surface, and I understand the irony that these cartoon chickens are smiling when they represent so much suffering.”

With Los Pollos Hermanos, the show has cleverly linked animal products with drugs. Gus Fring, the kingpin of both, recognises that he is a purveyor of poison. Why else would he choose poison to achieve the crowning moment of his career, the destruction of a Mafia cartel (Season Four, Episode Ten)? Fring and the other gangsters drink from the poison, and only he is saved – because only he recognises the evil that he has consumed, and takes steps to purge its harmful effects from his system. The others are too busy enjoying superficial pleasures to realise what they have imbibed until too late: Fring does to the cartel what he has already done to his consumers.

If this connection between meat and poison seems too far-fetched, let’s not forget that it is a recurring motif. In Season Two, Episode Two, Walt poisons Tuco’s meat.

Then in Season Three, Episode Twelve, Jesse poisons two burgers in an attempt to kill a pair of drug dealers.

And at the end of Season Four, Walt defeats Gus and replaces him as Albuquerque’s master of poison. He achieves this, of course, by poisoning somebody: an innocent child, Brock. We don’t see how he gets Brock to ingest the Lily of the Valley poison, but it’s safe to assume that he put it in Brock’s food.

So Breaking Bad breaks down the boundaries between drugs, poison and meat, presenting them as, at the very least, overlapping categories.

The symbolism of non-vegan food throughout the series is obvious: it is repeatedly linked to moral weakness. In Season Three Episode Two, Walt’s pizza represents the tainted nature of his attempts to appease Skyler, and then becomes a visible projection of his rage.

In this scene in Season Four, Episode One, note that Walt is not eating anything: he has taken Jesse to the diner but he is abstaining while Jesse eats the meal, exactly as he has just forced Jesse to kill Gale. Walt has let Jesse commit the act himself, while reassuring Jesse that their consciences are clear – but this scene underlines the reality: both of them are culpable for their crimes, whether the crime is cold-blooded murder or a meal at Denny’s.

The closer we look, the clearer the message: non-vegan food is a fundamental ingredient in the dark events that unfold across our screen. This symbolism is crucial to understanding the essence of what Breaking Bad is all about.